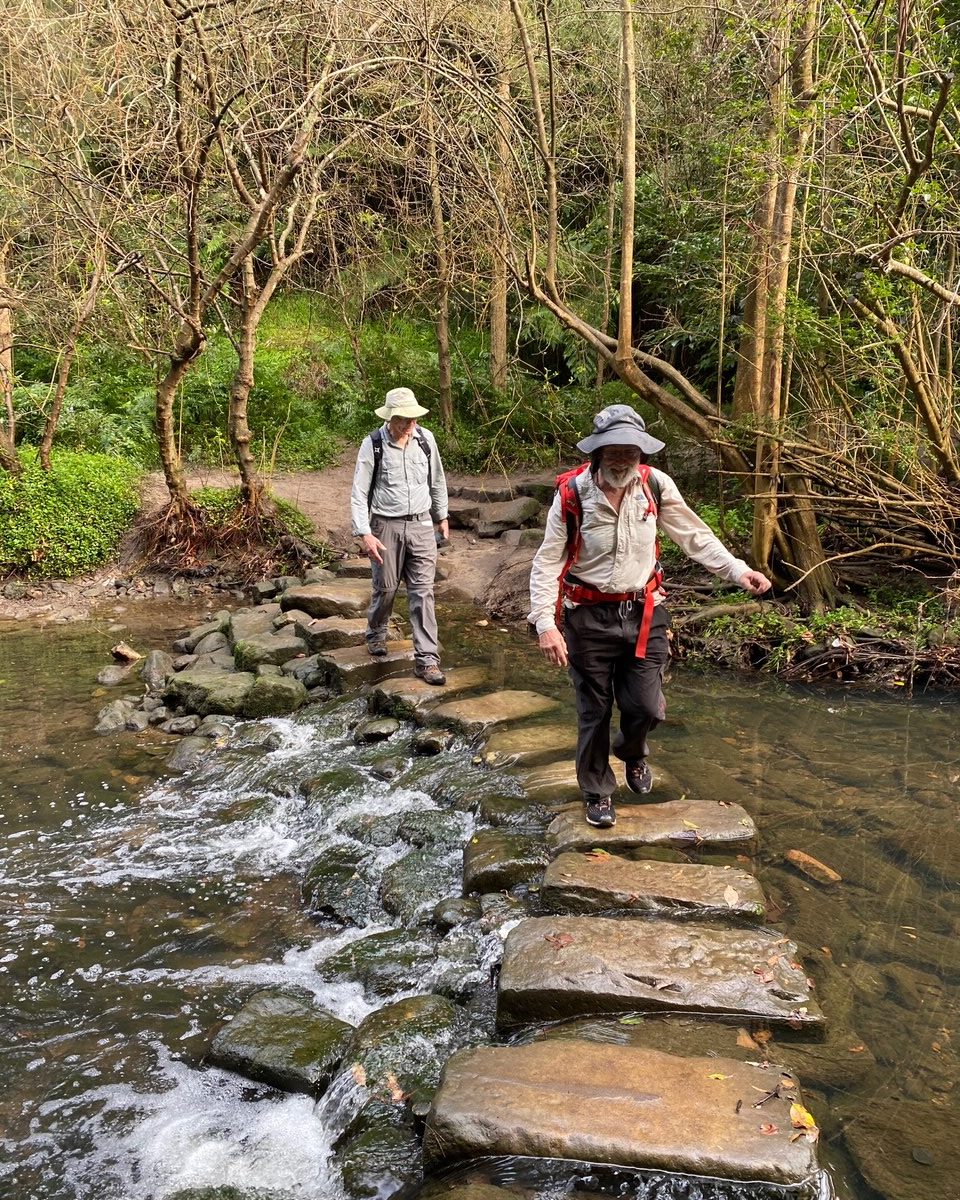 What a great event was the Woronora Pipe Dreams Rogaine. Excellent map, fine conditions and some refined control placement. Today, comparing the 1:20,000 map with the 1:25,000 Socialgaine map of the same area from 2013 shows a huge amount of additional detail to help the night-time navigator. Congratulations and thanks to course setters Nicole and Brooner, vetter Mike, administrator Anita and organiser, President Trev. Especially for the opportunity to get off track and search out tricky controls with hazards for the unwary. The organising team’s work was rewarded by big numbers and a friendly atmosphere. This weekend was to have been the world championships at Lake Tahoe, California now postponed to 2021. I was happy to settle for pipe dreams instead.

Having just reached the milestone of becoming an Ultravet and having stepped down from the inconvenience of work I thought I was a good prospect to join an Ultravet rogaining team. Ted ‘the technician’ Woodley and John ‘no mistakes’ Anderson were welcoming but it turned out that team membership required participation in training and a series of tests in July.

The first was a march around the local government area of Willoughby. This is a ‘thing’ supported by the Council and is broken down into eight walks. We did it all in one go – about 32 km in just under nine hours and 750 metres of ascent and descent. Highlights included Stringybark Creek, the inlets of Middle Harbour, mangroves, historical interludes and no shortage of fancy houses.

The second was a rerun of the Lane Cove Rivergaine from 2015 set by Ted and taking in a quest to find the source of the Lane Cove River, the headwater creeks of the valley, a little known dam on Avondale Creek and even a volcanic diatreme. We started at 6.30am, walked 35km, climbed over 1000 metres and ‘recorded’ 2200 points.

Sometime during June Chris Stevenson had the idea that we should try a walk down into the Kedumba Valley below Leura Falls returning via Kings Tableland. It was a long day returning after dark with over 30km walked and 1400 metres of ascent. Having survived that we tackled the relatively new Great West Walk, a track which runs from Parramatta to Penrith. We took a break at Rooty Hill and used the train to return. It was two 30km plus days of relatively flat walking and took in some bushland new to us. When we reached the Nepean River I imagined I was Watkin Tench (Governor Phillip’s lieutenant) who, having hiked across the Cumberland Plain, then tried to work out if the river he had reached was the same river as the Hawkesbury.

Surviving this training was combined with pace counting tests. I do it if I really have to but tend to be lazy and, later, regret not being more careful. This team was more committed. Question was how many double paces to 100 metres. Was it 60, 65 or 70. What about gradient, thickness of bush, tiredness. It all depends and I need to practice. Ted with Suunto watch on one wrist and new Apple watch on the other was finding during our training that Apple claimed more distance overall than Suunto, and my Garmin was closer to Apple.

For navigation and route choice I learnt that the teamrule was ‘if in doubt, slow down, discuss and all agree’.

The third training was doing all 30 controls at the Terry’s Creek Moonlight Madness event plus walking there from home. Thanks to Bennelong Orienteers for being patient with my late return about three times the usual 45-minute time limit. The lateness wiped out the whole of my score. We were going to walk home but wisdom took over and we combined walking with train. In total 38 kms over ten hours! Highlights: the amount of water around after recent downpours, the middle reaches of the Lane Cove valley, and pizza on the hoof.

So it was that we arrived at the Pipe Dream battle-hardened and with a little recent night-time navigation under our belts. John and I gently suggested that the absence of other UltraVeteran teams meant we could take it easy. However, Ted ‘victory or doom’ Woodley was having none of it. Overall route choice was not too hard although inevitably our flight-plan proved ambitious and return route missed 150 points, enticingly close but out of reach. All agreeing on every navigational choice proved tricky and a democratic process evolved whereby two votes out of three usually won the day. We were cautious and knew where we were the whole time; lost a few minutes on a few occasions but nothing too serious. Overall result very satisfying. Especially when that old adage is taken into account: ‘it doesn’t matter if you are second last as long as you beat the Webmaster Chris Stevenson’. By the way great Blog post, Chris.

Now the ultra veteran team is entering the NSW Championships at Gundabooka National Park near Bourke, first weekend of September – an adventure in some very different country.

I greatly enjoyed last night’s rogaine and thanks to everyone involved in making it happen. I have done over 90 NSW rogaines and this one certainly rates in my top 5. A number of factors contributed to this enjoyment:

The course was really good, there were a lot of bush controls. It certainly was a “navigator’s rogaine”. A lot of the controls were set on subtle features and the small flags were used, mostly hung against the trees. This meant that if you were off your game you could easily walk past a control. Additionally, in some parts of the course there were tracks everywhere so you could not just rely on the tracks for navigation.

The bush was good for rogaining. You could get off track and still move through the bush pretty quickly. Often in rogaines close to Sydney you are confined to tracks by National Parks policy  or if you are not encumbered by these rules then you have to contend with a lot of fight scrub. The only difficult scrub we found last night was upstream of 71. I tried to bag this control by “aiming off”. I intended to join the creek slightly below the control and then walk up the creek. What actually happened was that despite careful navigation and pace counting, we started upstream of the control and kept moving upstream through some pretty thick stuff. We ventured upstream for 9 minutes before retreating to the nearby fire trail to re-think and then bagged it 3 minutes later.

The weather last night was perfect for rogaining. It was nice and cool but not so cold that you thought you were going to die of exposure if you stopped moving. I often find my performance in rogaines hampered by varying degrees of heat stress and last night’s temperature was perfect to get the best out of me.

The hills were hard but not so big that you regretted your own existence half way up. Often in Blue Mountains’ rogaines you plan your rogaine around how many times you can physically manage to climb from the creeks to the hill tops. Last night was certainly hilly but most were under 80m and you could plan your course without being scared of inserting too many climbs.

I really, really enjoy bagging a difficult control in the dark with my headlight off and, once bagged, melting into the bush while others stumble around in circles. A good example last night was control 70 which was a ‘broad gully” with no  easy “handrail” to help you get there. Team mate John Clancy and I walked straight onto the control having done a pace count from the creek to the west of the control. There were a few other teams in the vicinity looking for the control at the time but I don’t think any of them saw us punch the control in complete darkness and move quickly on.

Despite my enjoyment of the course, the great weather and open bash last night my team mate, John Clancy, and I did not do very well. We were badly let down by our route choice. We had planned an unrealistically big route and, once we realised we were not going to achieve that route, we made a “Plan B” route which was rubbish. I hate stopping mid rogaine, but in hindsight a few minutes spent doing a proper replan would have been a good investment.

The other thing I didn’t enjoy last night was being beaten by ex-team mate Julian Ledger. Julian is now an ultra-veteran and sought the company of other ultra veterans last night in the form of Ted Woodley and John Anderson. Not only did Julian, Ted and John beat us soundly by 110 points, they also won the Men’s Ultra Veterans’ category. They also won my category, the Men’s Super Veterans. Julian, Ted and John also came a creditable 2nd in the Men’s Veterans. I hate to say it but, “Nice job guys!” My revenge at being jilted will have to wait until the NSW Championships.